EASD / ENV.net Team from Serbia commented on the EP Resolution  with focus on the ENV.net related issues :

In the Palace of Serbia in Belgrade, on 16 December 2013th , Workshop for strategic planning of further work SECO mechanism is organised. Workshop organizers are: the Office for European Integration of Serbia – Department of Planning, Programming, Monitoring and Reporting on EU Funds and Development Assistance, Office of cooperation with Civil Society – Government of Serbia,  TACSO project and TRAG  foundation.

Agenda includes  reviews the functioning of SECO mechanism, a discussion on the current mode and define recommendations for improvement of the mechanism. EASD is the leading organization in SECO mechanism for Environment and Energy. The representative of the EASD-ENV.net Serbia participate at the Workshop. The meeting is also attended by organisations in the same cluster, i.e. representatives of organizations CEKOR (ETNAR Project partner in Serbia ) and Young researchers if Serbia. 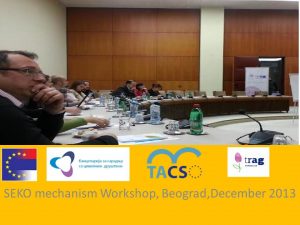 To note that within the project “Support to the Department of Planning, Programming, Monitoring and Reporting on EU Funds and development assistance to the Office for European Integration of Serbia, for establishing a partnership to promote the use of international assistance “in March 2011 the SECO mechanism in Serbia  was established, enabling civil society participation in planning and monitoring of EU and other international development assistance.

As the FPA project grantee, EASD-ENV.net Serbia Team presented project update and further project strategy to Mr. Nicola Bertolini (Head of Section, European Commission, DG Enlargement, Unit D3, Regional Cooperation and Programmes) and task managers and  political officers of the Delegation of the European Union to the Republic of Serbia on November 28, 2013.

Acknowledging the outreach of ENV.net Survey and ENV.net 2013 Roudtable recomendations, EASD – ENV.net Serbia recognized importance of  children/youth education  for active EU citizenship , through promotion of EU environmental values. We would like to share moments from kindergarten “Pčelice”, from village Šetonje, as promotion event for environmental values in education (held on November 19, 2013).  With children and teachers, as well as EASD Team, there were Prof dr Ivica Radovic and mr Ljubiša Antonijević, assistant ministers for education and science. 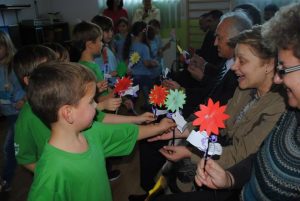 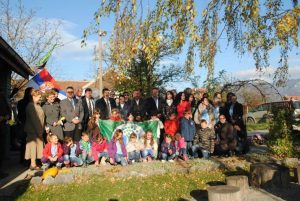 On November 15, 2013,  IPEN Secretariat based in Barkeley, USA, welcome EASD, one of the ENV.net partner, as an IPEN Participating Organization (PO).

IPEN is a global network working to establish and implement safe chemicals policies and practices that protect human health and the environment around the world. IPEN’s mission is a toxics-free future for all.

The First constituting meeting of the European Union-Serbia Stabilisation and Association Parliamentary Committee,  was held on 15 November 2013, at the National Assembly House in Belgrade ( co-chairs statement can be viewed  here ).

CSOs representatives are invited to this important event for Serbia’s EU accession, and among them the Serbian ENV.net partner Environmental Ambassadors for Sustainable Development representative.

Moderator Dimitrios Zevgolis, DG-Climate Action, introduced the panel, which described projects taking place in the Western Balkans and Turkey on low emission development. He noted that most countries have not developed special climate action strategies, while highlighting achievements including the development of a climate project pipeline under the Instrument for Pre-Accession Assistance (IPA) and preparations for developing inter-institutional coordination. He called for strategic frameworks to improve top-down decision-making, integrated policy development across sectors, and cooperation and coordination. Imre Csikós, Regional Environmental Network for Accession (RENA), discussed the Environment and Climate Regional Accession Network (ECRAN). He noted that ECRAN builds on RENA climate results, saying 30% of the budget will be reserved for climate issues. He outlined the four working groups on: climate policy development and climate awareness; GHG inventory and Monitoring Mechanism Regulation (MMR); emission trading; and adaptation. József Feiler, Klima Politika, discussed the project Support for Low Emission Development (SLED) in South East Europe (SEE). He said the project aims to provide the basis for development of low emission development strategies by providing assessments through 2030 for energy efficiency in buildings and the electricity sector. He highlighted the objectives of electricity modeling in the SEE region including identification of cost efficient intervention, noting that the models will help address questions on the price impacts of policies. Andreas Tuerk, Joanneum Research, Austria, presented the project Low Carbon South East Europe (LOCSEE), noting the importance of finding synergies between projects that overlap. He outlined that their approach included preparation of state-of-the-art analysis in the field of climate change in participating countries, collection of good and bad practices, cross-sectoral National Working Groups (NWGs), capacity building workshops, development and improvement of low carbon policy papers, and development of a regional policy network.

During discussions, delegates from Croatia and Montenegro discussed their countries’ experiences with capacity building projects, noting the utility of modeling and assessments for the preparation of national GHG inventories and welcoming support in particular for human capacity development. A delegate from Serbia noted the importance of regional cooperation and highlighted activities they are undertaking related to climate change under the EU accession process.

On November 5th, 2013, ENV.net Serbia representative  participated in the Meeting where draft changes on Law  of Waste was presented by Ministry of Energy, Development and Environmental Protection.  Meeting was organised by Serbian Chamber of Commerce. Presentation was followed by discussion and about 140 persons participated .  The day before, draft changes on Law of Environment were presented.

EASD / ENV.net Serbia is concerned that some of changes should be carefully checked related to compliance with relevant EU directives.

On October 18th, ENV.net partner EASD participated to the presentation of Serbia Progress Report 2013 organised by the EU Delegation in Serbia. The presentation, focusing on economic chapters, was followed by a discussion with CSOs representatives.

Environmental chapter had a great attention in the discussion. The main conclusion of this discussion is that there are a lot of challenges for candidate countries in this sector (see EU Enlargement Factsheets – Energy, Climate Change and Environment), and little progresses achieved.

However, the EC conclusion is, in some relevant segments, different from the ENV.net Study conducted in June 2013. ENV.net study

Candidate – applied in 2009, obtained candidate status in March 2012. The EU-facilitated dialogue between Belgrade and Pristina was launched in March 2011. The First agreement of principles governing normalisation of relations was reached with Kosovo in April 2013. The momentum of reforms has also been reinvigorated in Serbia. The European Council decided in June 2013 to open accession negotiations. The first Intergovernmental Conference on Serbia’s accession negotiations will be held in January 2014 at the very latest, after the Council adopts the negotiating framework, which was proposed by the Commission in July 2013. In the meantime, the ‘screening’ began in September 2013. The Stabilisation and Association Agreement (SAA) entered into force on 1 September.