As a follow-up of the “EU Alignment Process and Environmental Impact Assessment (EIA)“ training and workshop conducted in December 2015, TEMA Foundation published and assessment report, aiming to reveal the problems related to the EIA processes, and to suggest solutions to solve these problems. The first three chapters of the report aims at informing stakeholder participants about the theoretical framework and history of EIA processes in addition to EU EIA legislation and alignment process. In this context, the report starts with short chapters on the theoretical and legal background of the EIA processes by three experts. 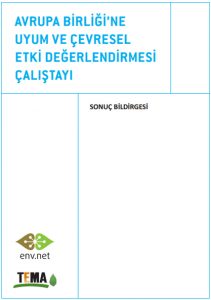 The second part of the report summarizes the results of the group activity organised during the workshop, where the participants were asked to comment on the theoretical framework, develop possible solutions and share their experiences regarding EIA processes. The first group activity was to identify participants’ common problems and categorize them, the identified final categories were: public participation, content, legal processes and monitoring and control. For the second group activity, the participants were asked to come up with a possible solution for one of the identified problems.

Lastly, the report presents TEMA Foundation’s Opinion and Suggestions regarding the EIA processes, which mostly apply to investment in energy, petroleum and mining sectors, which have substantial impacts on environment and public health. TEMA’s suggestions can be summarised as follows: