On 25, December 2015 in Skopje ENV.net Macedonia organised a working meeting with the CSOs, members of the Platform for Green Macedonia. At the meeting attended representatives from Kavadarci, Kumanovo, Veles, Skopje and Tetovo. The purpose of the meeting was to present the results achieved via the ENV.net in 2015, but also to discuss the activities foreseen for 2016, including ENV.net training, e-learning courses, joint events, the web platform.

Related to the re-granting process in Macedonia, participants were given detailed information about the procedure of the forthcoming call for proposals and the application package. The ENV.net team encouraged the participants to take an active part in the call, as well as to consider possibilities for partnering.

The last part of t 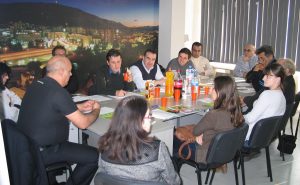 he working meeting was used to discuss the next steps with regards to the initiative for amending the Law on Environment (one of the key laws in the area of horizontal environmental legislation of the Republic of Macedonia), which would prevent construction or reconstruction of facilities of heavy and polluting industries at a distance of less than five kilometres from urban or protected natural area. Participants discussed several possibilities, like a gathering of 10.000 signatures in support of the initiative, lobbying of MPs to present the initiative before the Parliament, organisation of a Public hearing in the Parliament of Macedonia. It was decided to consider all the comments and in the beginning, of next year to come up with a definite plan for action.

In addition, it was discussed how to proceed in strengthening the Green Consortium, in order to be able to monitor the implementation of the legislation pertaining the sector water. Participants also discussed the possibility to engage in the initiative against discharge of cooking oil in the sewage that foresees wide range activities including research, field work, campaign for awareness raising, improvement of the legal framework, etc.