Env.net project partner TEMA attended the Climate Forum organized in Istanbul on 12-13 November. The aim of the Forum was to send a strong message to the World Leaders attending the G20 Summit in Antalya before the UNFCCC COP21 in Paris. As shared through Env.net channels previously, last September, Turkey announced its INDCs for the Climate Conference which with the currently planned rate of increase in the emissions, per capita emissions in 2030 will be around 10 ton CO2eq. The projection will allow Turkey’s emissions to increase at an even faster rate to its growth over the previous ten years. And if the reduction targeted by EU between now and 2030 is also taken into account, Turkey’s yearly per capita emissions would be at least double of the EU towards 2030. 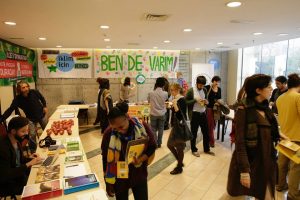