Association of Young Ecologists of Niksic implemented the final action of the project “Preserving and increasing the level of protection of water resources in accordance with the standards of sustainable development”, which included the organized visit to the estavelle and a lecture.

The participants gathered in the town square and the event was recorded by two TV crews. During the gathering, our activists distributed promotional materials about the project and the estavelle to citizens.

Participants crossed over 30 km in the cycling tour to the estavelle and back. In addition to the members of our NGO, students from Niksic and Podgorica, representatives of other NGOs, local government representatives, and citizens were among the participants.

A group that was not in a position to ride bikes was waiting for us near Gornjepoljski vir. Boro Vukovic, from the municipal Secretariat for Spatial Planning and Environmental Protection, addressed the crowd and in his presentation informed them about the characteristics of this natural phenomenon.

After the break, the cyclists returned to the city in an organized manner.

We believe that we have completely fulfilled the goal with this action and managed in our intention to, through practicing healthy lifestyles, promote Gornjepoljski vir as a special natural area and achievements of our project.

Recognizing its values, the estavelle Gornejpoljski vir was declared a protected natural area – Natural Monument, by the decision of the Municipal Council of Niksic from June 27, 2014. 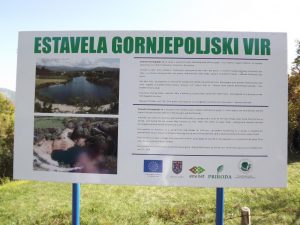