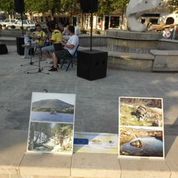 Association of Young Ecologists of Niksic (AYEN) organized an exhibition of photographs submitted to the photo contest “Water and us” in the city square on July 19.
The exhibition was realized within the second phase of the project “Preserving and increasing the level of protection of water resources in accordance with the standards of sustainable development.”
With the music of the band “Vis Bu­đo­la”, residents of Niksic had the opportunity to see the photographs that testify about the state of water resources in the municipality.
Photographs show the real state of the rivers, their beds from close range, and most of them testify to the poor condition of these sites. They were mainly created in the urban part of the city and suburban areas, or places where the rivers Bistrica, Gracanica and Zeta flow.
At the contest, which lasted for a month, 80 photographs were delivered and one video out of which 50 most interesting were selected for the exhibition.
The exhibition attracted a large number of citizens who alternated during the period of 4 hours and watched the photographs.
With these photos, we want to convey the message to the general public, both citizens and decision-makers about the importance of preserving water resources and also to motivate as many people and institutions as possible that are actively involved in the action of beautifying watercourses.