End of May and beginning of June ENV.net organized two separate meetings with 2 organizations which have been awarded subgrants in the framework of ENV.net call for proposals:” Development of the ENV.net in West Balkan and Turkey: giving citizens a voice to influence the environmental process reforms for closer EU integration”.

Organizations and funded projects are:

On 29th of May 2014 Pınar Gündoğdu from Doğa Kültür ve Yaşam Derneği which is located in Urfa came to visit ENV.net partners in Istanbul.  After a brief introduction from ENV.net team on ENV.net Project, Pınar Gündoğdu made a presentation on their project and on their organization.

The Project is about Legendary Pallid Scoops Owl which can only be found only in Birecik region in Europe.

On 11th of June our second Sub-grant winner organization from Van made a visit to Istanbul to explain their project and to sign the contract with the ENV.net. Their project named “Beautiful City, Clean Sea Van (Yeşil Bir Şehir, Temiz Bir Deniz Van)” draws get attention to Walnut Trees in Van. Aim of the project is to raise awareness in Van, hometown of walnut trees in Anatolia, through plantation efforts of school children. 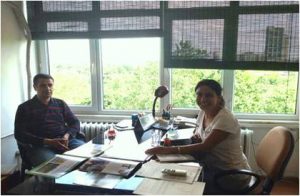 Garip Kızılkaya made a brief presentation on their plans and expectations within the project. After his presentation, ENV.net team gave him information about the procedures and forms to be used in the process of implementation and reporting. After this information section, the contract was signed.