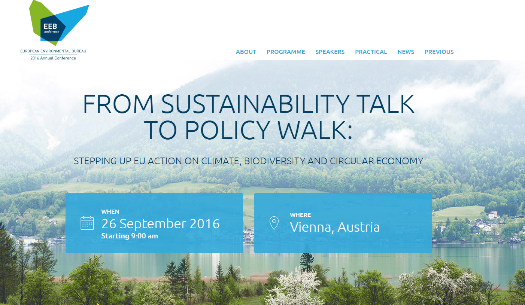 Registrations are now open for the EEB’s Annual Conference that will be organized together with EEB Austrian member Umweltdachverband in Vienna on Monday 26 September 2016. The EEB conference will be one of the first opportunities for those concerned about the environment across Europe to come together and take stock of the developments after the UK referendum on EU membership and its implications for the environment and sustainability. We will debate how the EU needs to now embark on an agenda of transformational change that puts the interests of people and planet first.

Within this framework, the conference will dig deeper into three issues that are high on the agenda this autumn, namely Climate and Energy, Biodiversity and Circular Economy. Confirmed speakers include the Austrian Federal Minister for the Environment Andrä Rupprechter, Ann Mettler, Head of the European Political Strategy Centre at the European Commission and Petros Fassoulas, Secretary General of European Movement International. Check out the full programme and register now on www.eebconference.eu