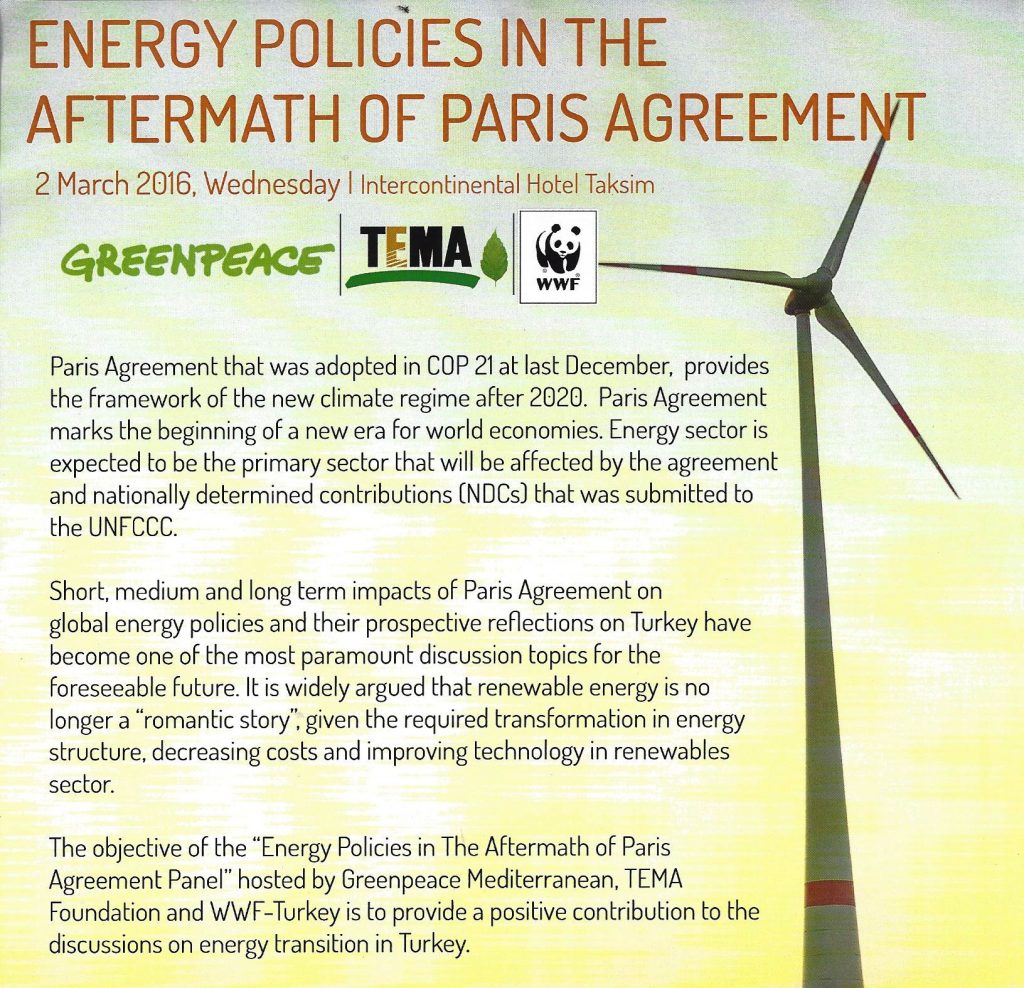 The Turkish Env.Net partner TEMA Foundation organised a panel on 2 March 2016, together with Greenpeace Mediterranean and WWF-Turkey discussing the post-Paris energy policies in Turkey, and urging the participants on the significant potentical and reserve of Turkey for solar and wind power. Panelists were Mustafa Serdar Ataseven, the chairman of the Turkey Wind Energy Association; Markus Steigenberger, Germany-based Agora Energiewende Deputy Executive Director; Kemal Bayraktar, the chairman of the International Solar Energy Society (ISES) Turkey Chapter; and Nilgün Açıkalın, from the Ministry of Energy and Natural Resources. The panel was chaired by Assoc. Prof. Barış Karapınar, IPCC lead author, and the General Director of TEMA Foundation. 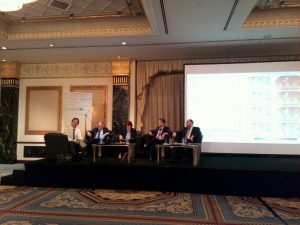 United Nations Climate Change Conference held in Paris in late 2015 has called on for a transformation in energy. Panelists underlined that economy should be decarbonized and the transformation should kick off as soon as possible, within the panel entitled “Energy Policies after Paris”.

However, Turkey’s target for 2013 as 20 thousand MW contradicts with the country’s target for 2030 within the Intended Nationally Determined Contribution (INDC), which was 16 thousand megawatt (MW), he urged.

Still, Turkey’s wind power has developed and 956 MW wind power has been commissioned, he said. Ataseven called on for an efficient planning of government policies and strategies, as well as the necessity for investments including transformer stations and transmission lies.

Germany has installed a wind plant with 6 thousand MW capacity only in 2015, while Turkey has merely achieved to install 4 thousand 800 MW, after series of “brawls”, he added.

Nilgün Açıkalın from the Ministry of Energy and Natural Resources praised “co-producing policies” as someone “from the state”, while explaining the state’s efforts to avoid “aggressive targets”. According to Açıkalın, as a developing country, Turkey will have different targets, strategy and policies, comparing to European countries. “We have founded a system based on fossil fuels; therefore, managing the system is harder. We are not able to ask for support if there is an interruption against the system” she said, underlining the security of supply and durability of electricity.

According to Açıkalın, Turkey’s share within these established energy sources reached 40 percent, after the Renewable Energy Law acted in 2005. Meanwhile, she praised Turkey’s share of natural gas, which approaches 46 percent, comparing to other sources such as coal.

Germany-based Agora Energiewende Deputy Executive Director Markus Steigenberger urged that COP21 has given the message that “we should do everything quicker”. Germany has been resuming its transformation of the energy system from fossil, nuclear sources to reneweble sources, with a renewable energy target of 80-95 percent, he said. Steigenberger underlined that Germany had two main reasons for transformation: Climate change attracting a clear awareness by Germany and economic interest. “Germany understood there’s a huge new opportunity. German companies had 400 thousand new jobs in the renewable energy sector. It s a new industry” he explained. Having underlined Germany has been a positive example by making efforts to phase out coal, lignite and nuclear, Markus Steigenberger called on civil society and business world to “use the momentum.”

International Solar Energy Society (ISES) Turkey Chairman Kemal Bayraktar said they have been aware of the solar energy potential of Turkey since the beginning, adding that the cost of solar has been decreasing. Turkey’s installed power is 249 MW, while the world’s capacity is 228 thousand, he said. Thus, Turkey with solar potential of 500 thousand is “at the zero point” comparing to the world, regarding electricity production from solar power, he added. According to Bayraktar, while the “conditions” of Turkey and and the region transform, “the game should be remade”. “Renewable energy offers opportunities for reconstructing the region. These energies can work together well, as we live together well, I project. I cannot see an alternative to the development of renewable energy, with respect to the United Nation’s sustainable development goals” Bayraktar said.