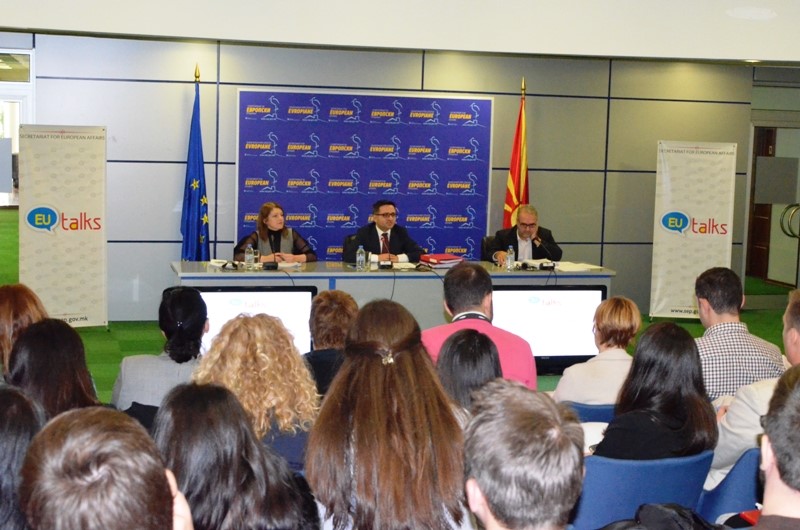 ENV.net team participated on the common meeting in the Macedonian Government – Secretariat for European Affairs regarding the publication and presentation of the Progress report for Republic of Macedonia.

The team proposed the same meetings for each Chapter from the report to be organised in next short period, reason is CSOs participation in building the Action plan towards better and real implementation of the EU acquis.

European Commission Enlargement Strategy, Progress Report on the Republic of Macedonia and discussion about next steps with the civil society organisations.

Deputy Prime Minister for European Affairs at the Government of the Republic of Macedonia, Fatmir Besimi PhD, speaking at the discussion about the undertaken steps after receiving the Progress Report, the results from the initial analysis prepared by the Secretariat for European Affairs and planned further steps toward progress achievement until the December EU Council, stressed the importance of European Commission’s preparedness for start of the accession negotiations mentioned in the Report, which is of great importance for the region and for the Republic of Macedonia.
The Government of the Republic of Macedonia remains committed to this strategic interest and will carefully consider any recommendations from the European Commission in the Government’s plan to implement urgent reform priorities. The representatives of civil society organizations had welcomed the discussion and also highlighted their opinions and views on the challenges noted in the Report. The Secretariat for European Affairs announced that the separate discussions with civil society regarding the key findings of the report shall continue in the future.