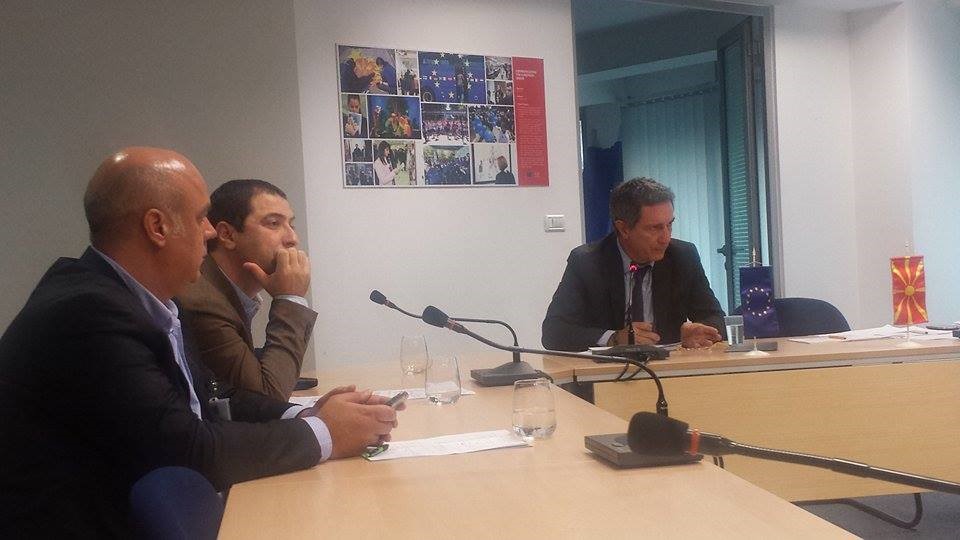 The presence of Mr. Bertolini in Skopje was used also to hold a meeting of all FPA Grantees from Macedonia in order to discuss the activities of the networks (realised, ongoing and forthcoming), but also to talk about the sustainability aspect – what are the plans for continuation of the initiatives after the official conclusion of the projects?
The ENV.net representative from Macedonia used this opportunity to present the achievements and outputs of the ENV.net project including the advocacy tool, training courses for CSO organised in each of the partners’ countries, e-learning courses, and the monitoring matrix, the bi-monthly bulletin as a tool for dissemination, re-granting, and the policy paper.
It was stressed that the re-granting process itself is a very good learning exercise for all parties involved, and the representative from the EU Delegation in Skopje suggested using ENV.net example as a case of best practice, especially when they start with implementation of projects with compulsory re-granting component.
Specifically about Macedonia, we pointed out several important achievements, like the establishment of the Platform for Green Macedonia, our established good communication with local governments and the Ministry of Environment and Physical Planning, as well as the latest initiative for amending of the Law on Environment (one of the key laws in the area of horizontal environmental legislation of the Republic of Macedonia), which would prevent construction or reconstruction of facilities of heavy and polluting industries at a distance of less than five kilometres from urban or protected natural area.
Pertaining to the aspect of sustainability of ENV.net, we stated that there are ongoing discussions among the partners related to restructuring of the network and involvement of key stakeholders, especially experts and representatives from the scientific community and other relevant bodies. However, we pointed out that our plans and considerations of how ENV.net will progress after the completion of the project will be elaborated at the forthcoming conference in Brussels, envisaged for January, 2016.