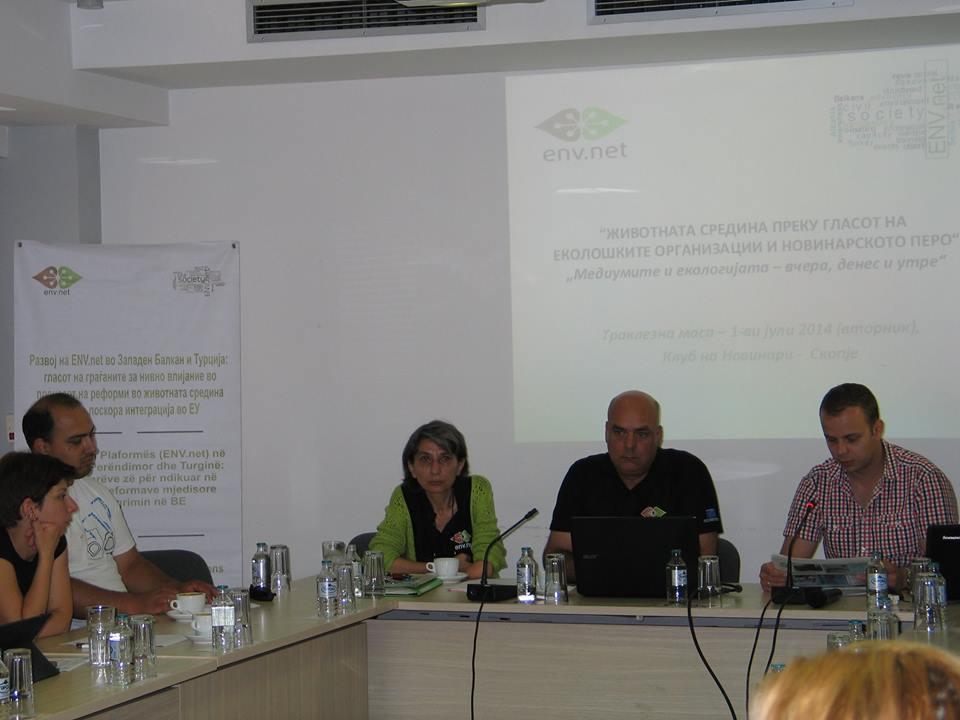 The first of the two roundtables, envisaged with the media representatives and aimed to contribute to better quality of information related to environmental issues and the ongoing process of reforms to comply with the EU environmental acquis was jointly organised by the ENV.net team from Macedonian and the Association of Journalists of Macedonia was held on 2nd July 2014 in the Journalists’ Club in Skopje.

The objective was to stimulate an open dialogue and better cooperation between the CSOs that work in the field of environment protection and media representatives regarding the current situation and the coverage of environmental issues. From the discussions derived several conclusions, among which were the following:
• To establish “eco reporting standards” (common position on certain issues related to the environment, sharing of experiences and collaboration between the journalists and civic organizations, as well as whether and how we may increase the space for “green articles” in print and electronic media).
To consider opportunities for regional cooperation of both environmental organisations and the media;
With aim to motivate journalists to include/give more space to “green topics”, to announce a competition on the “Citizens’ (un)awareness about the environment”, where the best story – news related to the environment published in the media (print or electronic) would be awarded by PAKOMAK, NULAOTPAD, or other entities
Based on the conclusions, to consider future joint steps and actions.

Proposed Eco Standards for the Media
Allocation of more space in the printed and electronic media on topics related to environmental protection (environmental and energy security, climate changes, sustainable use of natural resources );
Increased number of journalist in redactions who are specialised for environmental issues;
Reacting and informing general public on issues that are connected with serious disturbances in national ecosystems and natural resources (unsustainable consumption)
Publishing of researches connected to environment issues;
Promotion of EU environmental values through journalistic articles in printed and electronic media (aimed to provide continuous pressure on decision makers for the purpose of passing “healthy” laws and creation of responsible policies) ;
Through journalistic articles in printed and electronic media condemnation of all polluters that with their reckless behaviour pollute nature, and at the same time, highlighting of achievements of those working to contribute in protection of the environment (ministries, companies, non-government organisations, citizens, municipalities, cities…)
Continuous education of journalists on environmental and sustainable development issues;
Promotion of close cooperation with the “green” NGO sector.