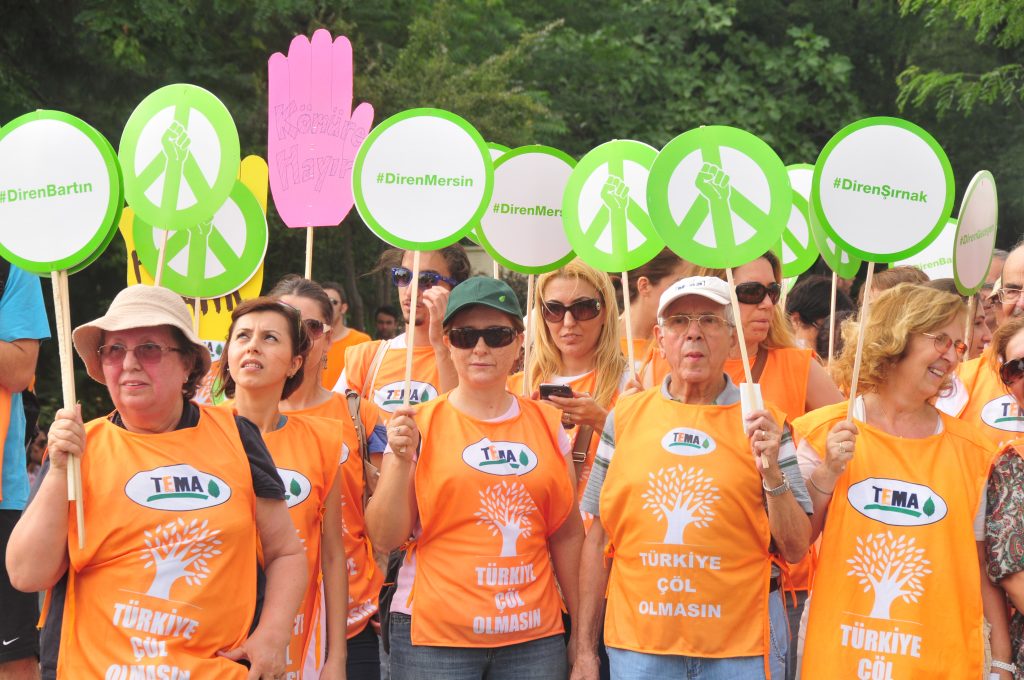 In 2013 while the threat posed by large-scale investments were in the public agenda, growing local environmental resistances and achievements provided hope. While the construction of projects that jeopardize Istanbul’s last forests , wetlands , grasslands and agricultural lands accelerated, local movements all over Anatolia that embrace nature continued.

TEMA Foundation assessed the best and worst developments regarding the environment in Turkey. 2013 was a year of harsh environmental struggles. Energy investments in Turkey was on the agenda throughout the year. The result is that people consumers 1.5 times the ecological capacity of the world, and by destroying nature continues to jeopardize their future . On the other hand, number of people who defend the rights of nature, who believe that in order to live one has to let live is growing.

The best events of the year 2013 in terms of environment

Gerze people who have been fighting a legal battle against the Coal-fired thermal power plant project for the last five years, and have been standing guard in front of the power plant site for the last two and a half years won a great victory. Environmental Impact Assessment of the plant planned to be built in Gerze, Sinop, was rejected by the Ministry of Environment and Urban Affairs on the grounds of the opinion delivered by the Ministry of Forestry and Water Affairs that ‘coal fired power plants can’t be built in forest area. This is the fourth time the application of the project that is located within 100 acres of forest land was rejected.

Victory at Mount Ida belongs to the environmentalists

Canakkale Administrative Court  stayed the execution of Environmental Impact Assessments of 4 firms that explores gold in Mount Ida for 8 years. Under the leadership of Çanakkale Environment Platform, a lawsuit was filed arguing that the EIA report is given without adequate inspection and examination and that there should be a cumulative assessment of these activities. Court decided despite the positive expert opinion, in favor of the plaintiffs that the mining activities will harm the environment.

Institutions such as the World Bank , the European Development Bank and the European Bank for Reconstruction and Development (EBRD) whose loans and financing systems play an important role in investment areas in the world endorsed their new energy strategy this year . These three major investment banks announced that they won’t finance coal investments except for “very rare and special circumstances where a viable alternative energy source doesn’t exist. These developments provided hope and created expectations for more investments for renewable energy sources and energy productivity in the upcoming years from these institutions.

No to Mining at Artvin Cerattepe!

Since the 1990s, Artvin Cerrahtepe with its breathtaking nature was under the threat of mining activities countless times. 258 supporters of life and nature filed a lawsuit for the cancellation of the mining licenses in the area. Under the leadership of Green Artvin Association, supporters have organized ‘No to Mining’ meeting. 6000 people attended the meeting and the local struggle of  Cerattepe and Genya found place in the national agenda.

Each Forest has a Hero! UNFF chose TEMA’s Founder as a “Forest Hero”

United Nations , TEMA Foundation Honorary Founding President Hayrettin Karaca “Forest Hero” was declared. Hayrettin Karaca was selected from among 47 candidates from 30 countries as one of five forest heroes of 2013. Award is presented to individuals whose activities ensure the sustainability of forests and forest on a global scale. Award Ceremony took place during the UNFF 10th Session in Istanbul.

Turkish Grand National Assembly Parliamentary Planning and Budget Commission declared that the HPPs (hydroelectric power plants) cause environmental damage and permissions will not be granted from now on for HPPs below 10 megawatts. While the threat of HPPs over 10 megawatts continue, we can’t help but wonder will we need to experience the damages of dirty, dangerous and expensive nuclear power plants to decide they are harmful.

We said 3rd Bridge is illegal and we were right!

Even though it doesn’t exist in the 1/100.000 scale Environment plan which is accepted as the Constitution of Istanbul , even though there are nearly 30 lawsuits against it at the moment, the construction of the ‘rd Bridge in Istanbul started on 29 May 2013. Those who live in the area of construction and connecting roads, as well as protestors from all around tried to point out and draw attention to the destruction of the forests and the fleeing rabbits, squirrels, birds. The bridge was declared exempt from EIA in this process, and its path was changed 1,5 months after the initial construction started by the General Directorate of Highways .

IPCC Report: Global warming in the climate is extraordinary and definitely anthropogenic.

While the world was struggling against extreme weather events in 2013 like hurricane, typhoon and floods, Intergovernmental Panel on Climate Change (IPCC ) delivered their  5th Assessment Report, ‘ Physical Science Basis of Climate Change’ in September 2013.  More than 800 scientists from all around  the World including Turkey undersigned a crucial reality: Global Warming in our climate is extraordinary! There is warming in the temperatures of the atmosphere and the oceans, amount of snow and ice is reduced, the average sea level rose and the accumulation of greenhouse gases in the atmosphere have increased. Both our planet and us, we are under a huge risk.

Climate Network of Turkey, platform for various civil society organizations organized a press conference in Istanbul on the same date as the announcement of the IPCC report. Participants urged the Turkish government to abandon their “wait and see” policy. Turkey needs to be part of the global solution and set aside its vision of coal-based energy  and replace it with energy efficiency, renewable energy and climate change adaptation policies.

While Other Countries renounce Nuclear, Turkey signed an agreement with Japan for the second nuclear power plant

While the developed countries renounce their investments in nuclear energy because it is dirt, expensive and dangerous especially after the in Fukushima nuclear power plant disaster, Turkey which has experienced the effects of the Chernobyl closely, continued its plans of construction of nuclear power plants. After Mersin Akkuyu, a declaration has been signed in October between Japan and Turkey for the construction of a second plant in Sinop. This agreement is the first one signed by Japan after the Fukushima disaster in 2011.

While the second nuclear power plant deal was being signed, controversy over the first plans in Mersin continued.  Review and Evaluation Commission meeting was held for the Akkuyu Nuclear Power Plant ‘s environmental impact assessment report. Non-governmental organizations who attended the meeting, pointed out that the reactor that is planned to be used at Akkuyu, VVER1200 model, has no other examples in the World and it doesn’t fit the ‘proven’ criteria. Also, there were no detailed information on how to dispose of nuclear waste in the EIA report or on how to dismantle the nuclear power plant.

Previously revoked by the State Council, the Provisional 3. Article of the EIA Directive that sets projects put under the investment plan before 1997 exempt from EIAs was added to the Directive again. This forms a crucial barrier against legal battles of the environmentalists against projects like the 3rd Bridge.

Another important embodiment was the Electricity Market Law. Provisional article 8 of the law, all public energy producers even if they are privatized will be exempt from environmental permits until 2021. They will also be exempt from administrative punishment from electricity production activities.

Moreover, with the Petroleum Law, the Turkish oil exploration in forest areas became possible. Tributaries of the Tigris and Euphrates Rivers Coastal Law Implementation Regulations were removed from the scope .  With the new Directive on Protected Areas, the degree of the protected sites to be removed or lowered became possible.